Mary E. Wack, Lovesickness in the Middle Ages: The Viaticum and its Commentaries (University of Pennsylvania Press, 1990) 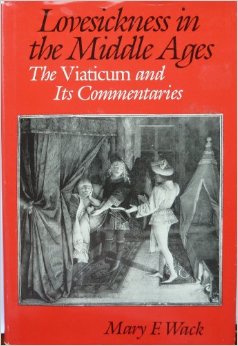 This book is a remarkable study of erotic pathology and its "discourses" from the eleventh century onwards, principally focused on the Viaticum of Constantine the African, a medical handbook derived from the Arabic of Ibn-al-Jazzar. This work had a wide diffusion in Europe, and its repository of information and insight opens out, in Wack's book, to a fundamental reexamination of the medieval understanding of and attitude to sexuality, comparable to the major studies of "courtly love," and one which all such studies will need to be complemented by. Its range of reference is wider than the Middle Ages, extending back both to classical antiquity and the Old Testament, and forward to the Renaissance, with glimpses to later times. It has a bearing on all the major literatures of Northern as well as of Southern Europe (and North Africa), though its principle texts are Latin. It is richly and aptly illustrated from a variety of manuscripts and other iconographic sources. An appendix gives the Latin text and an English translation of Constantine's Viaticum I.20, followed by several commentaries, along with admirably thorough and enlightening notes by Professor Wack. Written with a lucidity and forthrightness that at the same time avoids simplification and reductiveness, this book reveals an exemplary attentiveness to detail and organizational finesse