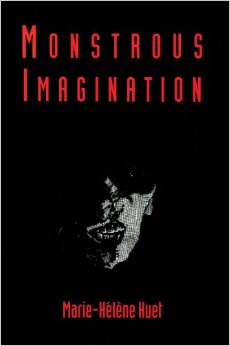 The word monster, Marie-Hélène Huet reminds us, was often associated with two distinct but related etymologies. One tradition held that the word derived from the Latin monstrare: to show, to display, to demonstrate. Another in turn linked the word to the verb monere: to warn, to admonish.

Bringing together philosophy and science, aesthetics and cultural history, and including readings of texts from French, German, English, and American literature, Huet's Monstrous Imagination is true to the etymological resonances of its title, for it is a work whose lucid prose elegantly showcases an impressive body of research, while its overall argument tells the monitory tale of how, from classical antiquity to the Enlightenment and well on into Romanticism, monstrous births whether they be human or artistic progeny bear witness to the fearsome power of the female imagination to erase the marks of paternity and, in an obscene parody of the Immaculate Conception, solipsistically usher abortions into the world.

"Where do monsters come from, and what do they really look like?" Huet asks at the outset of her book. From classical antiquity through the Enlightenment, from Aristotle through Malebranche, the answers provided by philosophers, theologians and scientists tend to be remarkably unanimous: monsters come from the mother, and more specifically, provide living testimony of those images at work on the desiring maternal mind or body during conception or pregnancy images whose traces can be read in imprints as banal as birthmarks (significantly called envies in French) or in such spectacular freaks of nature as the Hairy Virgin, said by such Renaissance commentators as Boaistuau, Paré, and Montaigne to have resulted from its mother's intense gaze upon an effigy of St. John dressed in animal skins which hung at the foot of her bed during conception.

Analyzing examples such as these, and drawing brilliantly on the history of the scientific debates that inform Renaissance and Enlightenment discourses on embryology, gynecology, and heredity, Huet persuasively argues that semiotically the monster represents the terror of a signifier detached from its legitimate origin, just as genealogically it poses a threat to patrimony in that it bears no visible relationship or resemblance to the father who conceived it.

But while the monster would therefore seem to display the uncanny power of the mother's vis imaginativa to distort and disrupt the act of procreation, at the same time it demonstrates the ultimate unoriginality of the female imagination, forever condemned to reproduce or merely replicate the objects of its desire by mere contagion, incapable of producing anything other than likenesses (Plato's eikastiken art), unable to master that higher generation of resemblances associated with interpretative or phantastiken creation. The ultimate scandal on monstrosity, Huet daringly suggests, may lie in not what it discloses about anomaly or difference, but rather what it says about identity that incestuous female economy in which female desire can only tautologically desire or produce like.

Having mapped out the scientific and philosophical prehistory of teratology (the term is not coined until 1830) in the first portion of her book, Huet moves on to a series of lively readings of Romantic and post-Romantic literary texts in the second portion of her study. Though perhaps best known as a dix-huitiemiste (as her bravura discussion of Diderot and monsters bears out), Huet brings a seasoned comparatist's confident range to her analysis of texts as varied as Shelley's Frankenstein, the tales of Hawthorne and Poe, Balzac's Le Chef d'oeuvre inconnu, Villiers de l'Isle Adam's L'Eve future and Gustave Meyrink's Der Golem, while also taking us on a fascinating detour through Mme. Tussaud's wax museum whose Chamber of Horrors devoted to regicides and parricides, she suggests, may be the most successful and most neglected masterpiece of the Romantic teratogenic imagination.

If the earlier history of monstrosity focused on the secret imaginings of pregnant women, Huet argues that Romanticism, even as it retains this earlier paradigm of monstrous conception, also reveals the epistemic desire to break with the mother altogether and to institute in her place a purely male parthenogenesis whose artistic products, in their sterile and hideous perfection, would be utterly self-sufficient procreations that dispense the other, replicas that abolish their originals, acts of creation that produce not filial resemblance but rather phantasmagoric repetition.

Appropriately enough, Huet concludes her book with a brief reading of Philip Kaufman's remake of Don Siegel's Invasion of the Body Snatchers, leaving us with the following cautionary meditation: if past histories of monstrosity all tried to answer the question "Where do resemblances come from?," how henceforth to respond to the postmodern logic of pod creatures whose contagious uniformity no longer reveals an identity, but rather harbors within itself a principle entirely alien to dialectic: a world of differences all monstrously the same.