Geoffrey Hartman, The Fateful Question of Culture (Columbia UP, 1997) 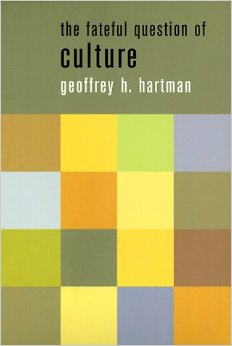 There is no mystery about the origins of the term "culture" (p.29). Cicero defined it long ago as a cultura animi or cultivation of the soul, much the way that "agriculture" is the cultivation of the soil. Hannah Arendt and others enlarge this definition to insist, on the soul's need for a "habitation," a dwelling place. Those rhetorical and philosophical expansions of "culture" lead to questions about it that become "fateful," hence the title of Hartman's patient, personal, digressive, insightful, and erudite, meditation.

At the heart of the matter is the contrast and sometimes conflict between a set of values that may be broadly characterized as aesthetic and textual, on the one hand and social, ideological and political, on the other. The term "culture" has come to have many meanings. There is, of course, the elitist statement by Matthew Arnold that culture is "the best that has been said or thought" (p.10), with its clear evangelism and even "coercive" didacticism. There are the famous and almost interminable discussions primarily within the German intellectual tradition on the distinctions between "culture" and "civilization," Kultur und Zivilisation, the Germans appropriating "culture" as their own property, the organic, pastoral, and holistic harmonies of the Volk contrasting with the more decadent, superficial, urbane qualities of the merely civilized. The merely civilized, we hardly need add, are the French.

The first, theorists of culture in Germany--writers and intellectuals like Fichte and Schiller-changed it from "denoting something antithetical to nature, or its radical improvement, to what could restore us to nature" (p.205). Hartman deftly summarizes how this apparently innocent formulation develops ideologically into the Blut und Boden strategies of thought and practice that informed National Socialism and facilitated, even demanded, the Holocaust. In Hartman's own words, "Culture is said to keep alive, psychologically and socially, the possibility of a unified mode of being. That so humane an ideal was co-opted by the perverse Nazi concept of Kultur compels us to scrutinize it even in its benign and universalistic form. And that some who criticize what today is labeled 'high culture' do it by applying arguments for ethnic solidarity uncomfortably close to völkisch notions creates all even more troubling situation " (p.127).

Statements like these, however subdued in their effect by the urbanity and erudition of the prose surrounding them issue a warning: the cultural theorizing of the Nazis and their antecedents is related to certain totalizing strategies in the field of "cultural studies" today. Though that relationship is not one of paternity or causality but rather, to use Goethe's term, affinity, that affinity alone should give us pause. Hartman asks us, in essence, to reflect on the consequences of adopting a "cultural studies" model of humanistic study both for the academy and for the society at large.

To turn the aesthetic into the social is to assume as given what the totalizing ideologies of this century would utter only as a wish -the wish to undermine the autonomy of art by weaving it, as "culture," into the ideological and social fabric of the nation. The questioning of the status of literature as "aesthetic" leads to its transformation into the ideological, the political--in sum, the merely cultural.

How can we counter the effects and implications of the transformation of the aesthetic into the cultural? By turning, Hartman maintains, to a tradition which had a different sense of culture than the German. Here Hartman appeals to England and in particular to the figure of Wordsworth. it is Wordsworth's "widening of sensibility" (p.141), exemplified by his choice of rural subjects and sometimes halting diction that is emblematic of the creation in English-speaking countries of a culture protected from the more brutal nostalgias of fascism. The best defense, finally, against such hegemonies is an aesthetic education that grants us freedom from compulsion through the play of humor as well as an nuclei-standing of the multivocal indeterminacy of art and I he fragility of texts.

It is fitting that Hartman's important, nuanced and timely meditation on culture should have first seen the light of day in 1992 as "The René Wellek Library Lectures in Critical Theory at the University of California, Irvine." The doubling of the honor of the name suggested by the ACLA's own award compels us to look back in gratitude at the stunning and massive achievement of the scholar, teacher and humanist who was once Hartman's colleague at Yale.